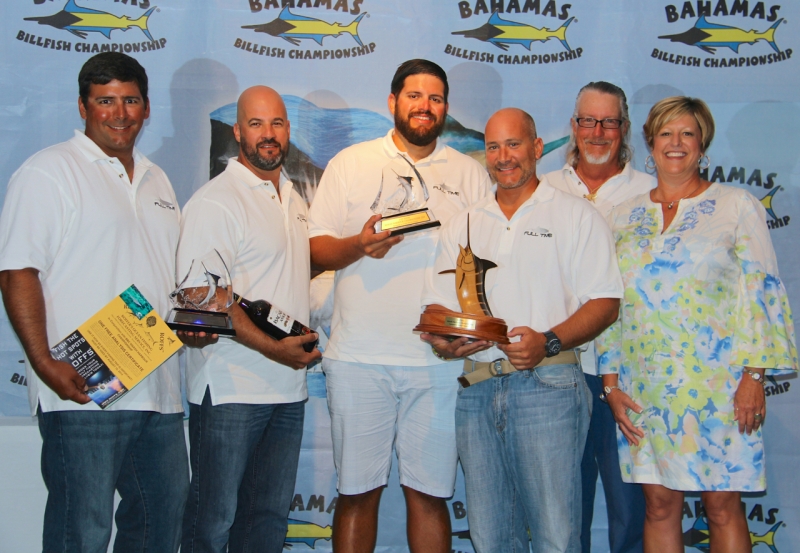 Full Time Was On the Fish in Marsh Harbour
Team Full Time found the fish in Marsh Harbour! The Miami, Florida based team led by owner Luis Perez, started off the fourth and final leg of the 2014 BBC series releasing two blue marlin on day one. Their success continued on day two when the team on the 63’ Bertram were able to release two additional blue marlin as well as a white marlin. These releases were enough to push the team far ahead of the fleet and earn them the win for the Marsh Harbour Championship.

The second place finish went to Jr. Davis and his team Wave Paver. In Marsh Harbour they released a white marlin on day one, a sailfish on day two and two blue marlin on the final day for a total of 1500 points for the week. The team fishing on the 61’ Garlington is familiar with the winners circle! The Kissimmee, Florida based team placed 3rd in Treasure Cay, the third leg of the 2014 BBC series.

Another team familiar with the winner’s circle is team Fa La Me. Led by team captain Frank Rodriguez, Fa La Me added to their points tally by releasing two Blue Marlin on day two. The double header blue marlin bite was just what the Winter Park, Florida based team needed to take third place.

The Bahamas Billfish Championship is proud to be an InTheBite ‘Captain of the Year Cup’ sanctioned event. All captains placing in the BBC tournaments are eligible for points towards this prestigious award. For more information visit  www.inthebite.com

The Bahamas Billfish Championship is the oldest billfish tournament series in the world. Anglers can fish any or all of the tournaments with cumulative points determining the overall Bahamas Billfish Champion. The BBC endowed two scholarships that enable Bahamian students the opportunity to pursue a degree in marine biology or advanced education in the marine technologies.